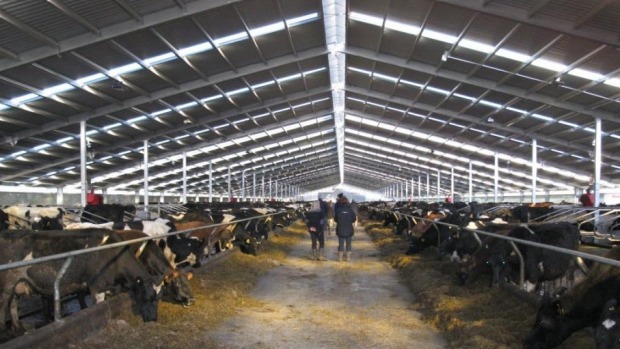 The infrastructure to support a herd wintering barn can add up to 70 per cent to the million-dollar plus cost of basic construction, a new study of the financial and environmental impact of barns has found.

The DairyNZ-AgFirst study of five South Island farms with free stall barns found additional costs around machinery and farm infrastructure added 10-40 per cent to the overall cost, and if the cost of additional cows and dairy company shares were included, the capital required increased the cost of the barn by 25-70 per cent.

AgFirst consultant Phil Journeaux said the basic construction cost of the barns in the study ranged from $1.2 million to $3m.

The study concluded that investing in a wintering barn delivered a feel-good factor for the farmers, but the outcome was not necessarily profitable.

It showed that inclusion of a barn without intensification of the farm system may reduce nitrogen losses, but at a significant cost.

With good management and intensification of the system, the investment could be profitable but this was dependent on the milk price, feed costs and initial capital outlay.

However, the farmers had generally invested in barns for farm management reasons, such as reducing paddock pugging, better utilisation of supplementary feed, better control of grazing management and feeding and shelter for livestock in adverse weather, better working conditions and reducing the cost of wintering cows off-farm.

Financial and environmental reasons were well down their list, said the study report.

In most cases, the introduction of a barn had resulted in more cows and higher feeding levels.

The results showed three of the farms were making money in the sense of returning a positive internal rate of return, but only one farm, in Southland, had a positive net present value, meeting the 8 per cent discount rate.

This was deflated for inflation and tax.

The base discount rate of 8 per cent is a Treasury guideline rate, based on the “government opportunity cost of capital”.

All of the case study farmers said they were highly satisfied with having a barn, apart from any economic considerations.

While some of this sentiment could be due to having made a multi-million dollar investment, they had no wish to criticise it, the report said all the farmers had spoken positively about the ease and flexibility of management provided, especially in adverse weather; better working conditions (not picking up calves in mud, wading through muddy paddocks); more content cows; less treading damage to pastures.

One farmer, when asked about the cost of a loafing area in the barn complex, had said: “Bugger the cost, I wouldn’t do without it”.

The capital value of a farm was not necessarily proportional to the investment in a barn, real estate experts had suggested.

For example if a $2m barn was built on a $10m farm, the property would not necessarily be worth $12m.

Newman said overall, the decision around investment in a barn tended to be either/or.

“Either you make money out of it or you reduce the environmental footprint of the farm.

“It is difficult to achieve both.”

All farms but one in Canterbury, and to a lesser extent, one in Southland, showed little change in nitrogen loss from pre-barn to post-barn, said the report.

Stage two of the study is under way in the Waikato.

In this stage, nine Waikato barns, of a different type to the South Island structures and including Herd Homes, will be studied for economic and nutrient loss impacts.

The final report with full results will be finished by the end of next month.