Fonterra has confirmed there will be job losses as it heads towards reporting a massive loss at the end of the month.

The extent of the cuts is unclear, but a number of sources have confirmed to Stuff they have heard about the losses.

It is understood middle management positions are more likely to go than processing plant workers.

A Fonterra spokeswoman acknowledged there would be cuts but would not say how many. “We have been open with employees that with a new strategy comes a new structure. Our new strategy is about being more focused, prioritising New Zealand milk, and being closer to our customers.

READ MORE:
* Fonterra’s ‘skeletons uncovered’ as it predicts loss of $590-675m for year
* Fonterra loss of $196m its first ever, Spierings gets $8m farewell pay

“That means we will be changing our organisational structure to support our new strategy. It is premature to speculate on where in the organisation these changes may occur or how many roles may be impacted,” she said.

Do you know more? Email rebecca.stevenson@stuff.co.nz

Dairy Workers’ Union secretary Chris Flatt said milk would not stop coming, and workers were needed to process it.

The last time the dairy giant shed a large number of jobs was in 2015 when 750 staff were laid off. At the time it said the downsizing would bring about $100 million of savings.

Last month Fonterra announced it would make an annual loss in the range of $590m to $675m, after making write downs of $820m to $860m. It was supposed to deliver the results on September 12, but has delayed that until the end of the month.

The Financial Markets Authority has also requested information from the dairy giant after receiving a complaint about the expected record annual loss and asset write-downs.

A source who Stuff has agreed not to name said Fonterra chairman John Monaghan had phoned him to tell him a large number of jobs would be shed. The farmer had earlier placed feedback on the Fonterra app.

The Waikato farmer said while it was good to see Fonterra addressing its problems, people at the top should be answerable for the situation it was in.

The company could blame former chief executive Theo Spierings, who has been replaced by Miles Hurrell, he said. “But John Monaghan was on the board and I confronted him, and he said ‘but we’ve got Miles on board now’.

“Miles is being put up as the saviour, but there’s no accountability on the board. They backed Theo, they gave him free licence,” the farmer said.

“They’ve lost billions of farmer assets. In meetings we’ve been asking how they have been valuing Beingmate so highly and asking for data since 2012 on which companies overseas were doing what – we’ve never had it.

“They’ve gone on saying everything is fine, but we’ve never thought that. At meetings I’ve been shouted at and told variously by [former chairman John] Wilson and Monaghan ‘you’re not to say any of this in public’,” Rowarth said.

Fonterra senior management and the board were due to go on investor roadshows next week, but Rowarth said she had now received notice the meetings were to be postponed.

She envisaged Fonterra’s consumer and foodservice business might have the biggest staff cuts.

“The whole China thing is a debacle, so if they’re getting out of China then people there could go. They’ve taken on vast numbers of people to do good stuff overseas and they haven’t been able to do that,” Rowarth said.

ASB analyst Nathan Penny said he did not know of any figures, but Fonterra was looking to save money and one place they would focus on was wages and salaries.

“So maybe there’s substance to the rumours, it wouldn’t surprise me.”

By hutchiesadmin | News | No Comments

ExportNZ supports the goal to reduce our greenhouse gas emissions along with the rest of the world. But we are seriously concerned about the survival of our food-producing export sector and our energy-intensive firms that export.

That is because economic analysis done by NZIER for the Ministry for the Environment shows that to get to net carbon zero by 2050, the price of emissions needs to be about $272 a tonne, under the most optimistic scenario. It factors in innovation breakthroughs in energy and farm animal emission reductions, and access to international emission reduction credits.

Given that the price of carbon is currently about $25 a tonne, this is a huge price increase which will flow through into the cost of food and energy. If other countries don’t adopt similar constraints leading to similar prices, we will put our farmers and our energy-intensive companies out of business. This will not just be bad for our economy but bad for the environment as well.

That is because we are verifiably less emissions-intensive producers of food and energy than other countries and if we price ourselves out of the market, other countries will fill the gap we leave with increased greenhouse gas emissions for our planet. 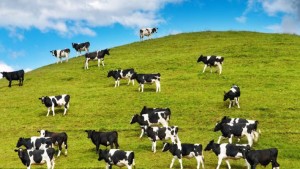 This problem, which is called “carbon leakage”, is why tackling this global challenge is such a wicked problem.

An OECD agricultural expert was recently in New Zealand. I asked him whether other countries would put a price on emissions from farming and food production. He said New Zealand is leading the rest of the world in lower emission farming already, both the way we farm (grass-fed) and due to our 20 years of greenhouse gas research. He said no other country would be likely to include agriculture in emissions trading schemes, either because it was a small part of their economy, or they were developing countries.

According to some economists, by the time the price of emissions gets to around $75 a tonne, most of our livestock farms would be converted into forestry. In my opinion this would happen way before that price was achieved.